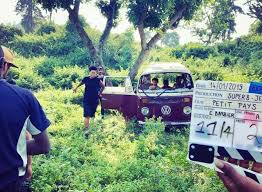 When a book is that good, it’s almost impossible to match it with a film, Petit Pays – the film did it’s best. The descriptive talent of the author must have made it easier for the film director, but still, a faithful rendition of the opus magnum that is Gael Faye’s ‘Petit Pays’ – the book.

Mr. Faye Snr, Gael’s father came to see the film for the first time in Kigali and was moved. ‘Il m’a tué ce p’tit’ (the kid killed me) he said at the end, as though to break a well-kept myth, that the book wasn’t in fact about the author’s childhood and that ‘Gabriel’ is the true ‘Gael’.

All scenes are shown through the eyes of children, a paradise slowly going to dogs, perhaps a reminder to adults of their duty to preserve children’s heavens. Translated in forty languages, the story balances love and conflict, africa and the west, childhood and violence, It is a gift to all children of the world.

For Rwandans it’s hard to focus at times for familiar faces of actors, most drawn from the Kigali art scene give a sense of reality TV, a good problem and one that other audiences won’t have. ‘No one can act the charismatic Gael’s father’, a friend who knew him had warned me. But French actor Jean-Paul Rouve did, a strong and sensitive character always trying to put out fights, within his marriage and his community, preserving the innocence of his children amid surrounding chaos; a master performance.

And there is Isabelle Kabano! What a class act! Totally at ease in the role of the fleeting mother, troubled by the mixture of conflicting identities in her life; a natural!

All the actors were excellent, especially the kids: Gino and Gabby, but the prize for best acting has got to go to the young talent who played sister to Gabriel. This little angel is headed for a successful career in cinema..

Watching the film I thought about Burundi; this could have been their moment had they gotten their act together. But it was Burundi’s too in a sense, as the casting included Burundian refugees currently sheltered in Rwanda, as if to confirm that the book wasn’t fiction after all, and that our region isn’t out of trouble just yet.

The book was timely as the film showed, to tell our tragic story in the most soothing way possible. But that’s a trap, it is an unpredictable film, just when one gets comfortable and thinks the story is safely oscillating on a happy path that it brutally brings one back to the painful reality of conflict, it’s an emotional rock‘n roll. The story is sequenced in a segway of powerful events that filled the lives of young teenagers of the 90s in Bujumbura.

Let’s be clear; the film is neither a faithful reproduction of the book, nor of the reality of what actually took place. 30 to 40 percent  of the film isn’t in the book, which itself is fictitious. So while as a student of history, I did not agree with almost half of it, I recognize the artistic liberty.

Much of it in Burundi, a bit of Rwanda, the film completes the Greatlakes trifecta with wisely selected Congolese rumba, all classics, for people in their late thirties upward who grew up in this region, it is the soundtrack of our childhood. With ‘Gahugu Gatoyi’ in the ending scene Gabriel-sorry Gael, and Jali capture the vibe, the scents, the feel and the touch. It was a full experience.

Thank you Gael for building us a cabin up in the garden tree, where we can all climb, if just for a few pages and escape into childhood again, and for giving us material for bedtime stories to our own children about the bittersweet memories of our childhood…

Our pain had been dramatized in many facets by other artists, it is our joys that had not been done justice with, as children of the Great Lakes region know, through it all we always found moments of joy and laughter, more often perhaps than our parents did and less I hope, as our children will..

In the words of Michael Jackson, ‘let’s heal the world and make it a better place, for you and for me and the entire human race’. Both the book and the film remind us of that.

Trump has a point, even though we may not like it.