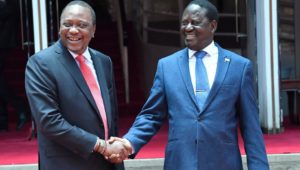 The other day, self-proclaimed People’s president Raila Odinga and Constitutional President Uhuru Kenyatta met for tea and agreed to bury the hatchet and embark on the process to unite the mighty Republic of Kenya. A highly noble and valiant action, which will remain, in my book, the single most important political action since I started following the politics of the biggest Economy of the Great Lakes region; from the day I was introduced to it 13 to 14 years ago, by Mutahi Ngunyi and Millie Odhiambo, then good friends, and now, two unrecognizable opponents.

Without being a buzz-kill, I would like to point out that Mr. Raila Odinga and Mr. Uhuru Kenyatta knew what they were doing the entire time; just like Mr. Raila Odinga and Mr. Mwai Kibaki knew what they were doing in 2007, when more than one thousand people were killed, following another disputed election; if I remember correctly, a similar kumbaya intervened thereafter.

It is a new day for Kenya and I thank God for this laudable outcome, again! I just wish innocent Kenyan lives were not lost recurrently for politicians to be struck by a sudden epiphany and shine as historical unifiers; somewhere between Mother Theresa and Ghandi.

While they smiled, a mother in Kisumu was grieving the loss of her child, shot by anti-riot police, while they called each other brother; a sister cried the death of hers, killed by the opposing camp; while they shook hands, a local shopkeeper despaired for the loss of his business, looted or burned to the ground by angry protestors. The only people never to be affected by the post electoral chaos are Mr. Raila Odinga and Mr. Uhuru Kenyatta; yet they are the ones to collect the reconciliation windfalls. Viva them!

I hesitated to publish this piece; ‘give peace a chance’, I thought to myself, ‘do not be a cynic’; or again: ‘It is not your place…’ Then again it is my place as an East African, and a Pan-African – and, Prof. Lumumba does it all the time and he is right, in my view.  I know that in just under five years, another election is coming and, possibly the same actors or their allies will be at play, hurling abuses of all kinds at each other, calling ‘their’ people in the streets, sending in riot police to violently repress protesters, all in the end to hug one another and shake hands all over again.

So my question today isn’t to the politicians, our saviors, but to my fellow East Africans; what have we learned from all this? What will we do next time?

I come from a country where one group of people was asked to hunt down and kill the other; they obeyed. My first job, around the time I met both Millie and Mutahi, I was a monitoring agent of community courts; ‘the Gacaca’, which you have probably heard of; there, I observed that the executioners did not really have conviction in what they were doing. They were duped to believe that some agitators in higher social, economic and political class were somehow closer to them than their lifelong neighbors, colleagues, wives or children. People they had lived with side by side for centuries and shared social-economic realities, were made strangers to them by egocentric misanthropes, keen to protect their personal powers and wealth; in the end, while they were being judged in the community jurisdiction, the politicians who incited them, were sitting unbothered in European capitals under the protection of their counterparts in European politics, business and clergy – to date.

“One puts us in front of the bullet and the other pulls the trigger. Then they meet for tea and call each other brother.” – A Kenya lamented on twitter, on the trending Hashtag #RailaMeetsUhuru.

But this Kenyan brother is mistaken. To be fair, Raila Odinga never came to his house and physically drag him onto the streets and place him – in his own words – ‘in front of the bullet’; nor did Uhuru Kenyatta hold a gun and – again in his words ‘pull the trigger’ on him; No! Raila and Uhuru were sitting in the conform of their luxurious homes, eating dinner, and after dinner, reading lullabies to their grandchildren, kissing their children good night, and switching off the lights, before falling into peaceful and sound sleeps; respectively.

My question is, where were you? If you were out on the streets protesting; if you were in front of a gun, throwing stones at the riot police; if you were pulling a trigger on protesting civilians; I am afraid the joke is on you. If you think because your name is Onyango you are related to Odinga; or that you are called Kariuki and that makes you Kenyatta’s cousin; you have lost your mind; let me explain:

His Majesties Prince Raila Odinga and former Crown Prince and now King Uhuru Kenyatta are more related to one another than any of their alleged ‘tribesmen’. The two royalties grew up in the same lavish neighborhoods, went to the same private schools, and are members of the same exclusive golf clubs. They see Kenya and its people (you) as their inheritance, left to them by their respective fathers, whom are sung in Kenyan songs, have monuments erected after them and streets named after their children.

The two royalties see the preservation of their dynastic rule, enrichment, power and aggrandizement as the sole purpose of your collective existence. Nothing; and I mean nothing that the Kenyan people have done since independence, has suggested to their highness otherwise; I mean, intellectuals and peasants alike have consistently given their lives, so they can get to and stay in power. If any protester in rallies thinks they are conducting revolution? They aren’t, for change represented by Mr. Odinga, Mr. Kalonzo, Mr. Mudavadi, Mr. Miguna; that’s no change at all – that’s more of the same.

That their highness meet today to agree on the terms of sharing the spoils of your collective efforts is honestly in the order of things, but that isn’t even my quarrel with you. So I implore you, give them everything they ask, but please, never again should we harm our brother and sister in their name.