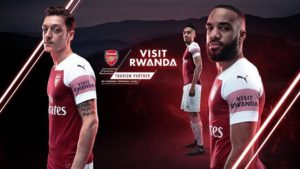 (14) ‘a man going on a long trip called together his servants and entrusted his money to them while he was gone…(19) “After a long time he called them to give an account of how they had used his money (20)…you gave me five bags of silver to invest, and I have earned five more’ – Parable of the Three Servants, Matthew 25:14-30

Growing up in Kigali, I used to admire a young man who carried on his shoulders another young man with Lymphedema, a disability of swollen legs. They dwelt around downtown Kigali, begging.

The entire time I’d thought the fit young man had sacrificed his life to support the one with disability to make a living, I was wrong! The real beggar, as my aunt explained to me, was the fit young man.

He ‘sold’ the disability of his friend to beg in Kigali City. I was around 17 years old, when I learned the truth, I was devastated. Even at that young age I understood the evils of exploitation.

The partnership to which Rwanda paid an undisclosed amount of money, aims at fostering tourism in Rwanda and entails the club’s players wearing the brand ‘Visit Rwanda’ on the left sleeve of their jerseys.

While the move was celebrated in Rwanda and across Africa as a bold, disruptive tourism marketing coup, it was demonised by some western politicians and journalists.

All tags came out: ‘African’, ‘dictator’ from ‘poor country’, ‘living on western aid’, funds rich western club – without forgetting a misspell of the country’s name: ‘Ruwanda’.

While this message helped the UN agency collect funds, it unwittingly entrenched the ‘Save African child’ narrative and gave relevance to all in the charity business.

After ten years of charity promotion, Barca eventually relegated the ‘Unicef’ message to the lower back of its jersey and in smaller characters, as it signed deals to front big businesses; first Qatar Airways, then Japanese retailer Rakuten.

In the same vain, the purpose of aid is to do itself out of the job.

In principle, aid is given on the understanding that its beneficiaries innovate ways to generate enough taxes and resources to eventually become self-sustainable.

To use the metaphor of the young man with disability, the idea is that he may use the money he begged to receive Lymphedema treatment and be able to stand on his own feet. Except his transporter, the fit young man might lose his job too.

Contrary to popular belief, Africa does not live off aid. That is one among many lies about Africa that are told by western media, politicians and charities. Overall, Africa receives only two percent of foreign aid; that’s right: 2% of aid!

Which means 98% of our livelihood is internally generated. In the case of Rwanda, its 2017-2018 (combining domestic taxes and loans) budget is funded to the tune of 84%. In other words the country receives foreign assistance for only 16%.

It is in an effort to phase out even the 16% that Rwanda Development Board (RDB) entered into the ‘Visit Rwanda’ deal with Arsenal.

Rwanda, through its president Paul Kagame makes no mystery of its intentions to phase out aid as fast as possible, and for that it picked aid-sceptic, economist Sir Paul Collier to advise its Capital City- Kigali, instead of U2 musician-turned philanthropist Paul David Hewson, aka Bono.

Rwanda’s decision to pay top dollar to promote touristic options with a top club of top most popular game at the heart of a top European capital, marks a paradigm shift in Africa’s priorities.

Sixty years after independence; national budgets and foreign aid all focused on humanitarian and consumption avenues, Africa means business and wants the whole world to know.

We may have entered an epoch where Africans want to have their continent presented as a high end, fun, vibrant destination to vacation and invest in, rather than a poor place to send charity and save.

This shift however, marks a slow and painful death of charity, populism and condescension. Yet, like in the young beggars’ story, western countries need the condescension as much as Africans need the 2% aid. How else would Western countries be justified to have a say on the remainder 98% budget that Africans generate for themselves?

But there is a much bigger problem: Travelling to Africa may give awareness to the western public. In the Daily Mail article: Rwandans are ‘12 million citizens terrified into submission by a dictator who tortures detainees, has detention camps, kills journalists and jails dissidents.’ This is standard description of an African country, frequently used by politicians, the media and the NGOs in the west.

Now imagine if more and more Europeans, Americans and Australians got to travel to Rwanda, have a good time and realize the whole depiction is a fallacy. That would be the end of the Daily Mail, right wing populists and the entire charity business; all things considered, the Arsenal deal might serve Rwandan and Western citizens equally.

Make no mistake, the reactions weren’t due to laziness on the part of journalists to dig beyond the surface, or ignorant on the side of politicians to understand developmental states; the skepticism simply reveals fear from imminent obsolescence.

They got hit where it hurts the most, at the heart of global propaganda: Sports! A popular London club advertises a black African country as a vacation destination. They haven’t gotten the memo that the lady CEO of RDB just went for one of those top degrees at Harvard and there is a new marketing strategy at Rwanda Inc.

They will talk all they want, but for the next three years, that is 1,095 days, 35 million people from across the globe will see a message saying ‘Visit Rwanda’ daily from jerseys, teardrops, banners, billboards, TV adverts, Video games, etc.; that is more than Thirty eight billion times (38,325,000,000), which potentially means that every human being on the planet will see Visit Rwanda at least three times. That’s more than one billion times than anyone will ever read all western media combined.

Everybody smile, the #SaveAfrica narrative has just been disrupted!