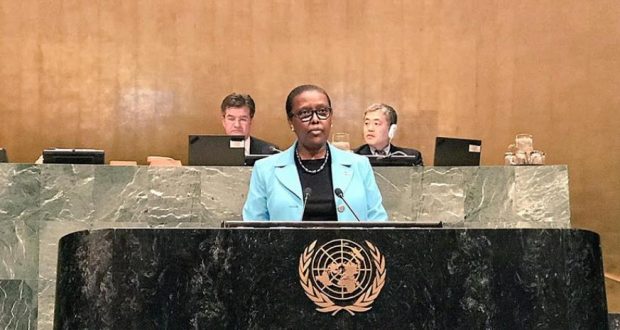 The designation: “Genocide perpetrated against the Tutsi” has become “Jus Cogens”; Latin for: “Peremptory Norms” of international law.

On Monday 5:01pm, the United Nations adopted a resolution 74/273, recognizing April 7th as the “International Day of Reflection on the 1994 Genocide against the Tutsi in Rwanda”.

However, upon adoption by consensus of all 193 members of the UN General Assembly, including the United States of America and the United Kingdom, the two nations expressed reservations on the text, which according to them, did not fully capture the violence committed against other groups. “Many Hutu and others, the reservations argued, were also killed during the genocide, including those murdered for their opposition to the atrocities that were being committed.”

While the two Security Council members were referring to moderate Hutu, Belgian peacekeepers and others targeted by the genocidal regime as obstacles to the Genocide project and assassinated in the early hours of April 7th, their reservations were twisted by genocide revisionists to allege that this meant there was a double genocide in Rwanda; one targeting Tutsi and one targeting Hutu.

To accomplish their mission, genocide perpetrators have always counted on a simplistic or ambiguous reading of the situation on the ground by world powers. They have also counted on opportunistic NGOs and self-projecting stringers looking to pitch a tropical story by distributing guilt and portraying all Rwandans as killers.

Since the end of the Genocide, Tutsi survivors continue to say to the world: ‘where were you when our people were being killed’?, while perpetrators say to them: “you did nothing wrong because Tutsi deserved to die” or “We killed them because they wanted to kill us.” That negative solidarity is corrosive and an insult to the memory of the one million Tutsi victims.”

As the genocidal government and its militias carried out the massacres of Tutsi, the UN Security Council debated the right categorization of the killings taking place in Rwanda. Those who supported the regime maintained that it was an all-out killing spree where ‘everyone killed everyone’.

The UN ignored frequent communications by then head of the peacekeeping mission in Rwanda, General Romeo Dallaire that a genocide against the Tutsi was being prepared, then carried out in Rwanda. Late French President Francois Mitterrand may have even remarked: ‘in that part of the world, a genocide isn’t that important’. This is a disguised way to exonerate those who did not act and those who actively assisted the genocidal regime.

If Francois Mitterrand claimed that in Rwanda a genocide was nothing special, it’s perpetrators too believed the lives of their victims weren’t of the world’s concern.

It then shocks them that Tutsi, a people they had spent thirty years demonizing, stigmatizing and killing, would attract such world attention. The UN resolution recognizing the genocide against the Tutsi and setting aside a special day for their commemoration is a world’s indictment to racism, it is a negation of the theory that “Tutsi must be annihilated for Hutu to thrive”, as the genocide theory purported.

It is a world’s recognition that Tutsi too have a place under the sun. This recognition does not in any way undermine the full rights of the Hutu or Twa ethnic groups, and the post-genocide Rwandan government wouldn’t have it any other way. As a retired army commander told me, the Rwandan Patriotic Front endeavored to share its meager resources to feed and care for the hundreds of thousands Hutu families in areas that they had conquered, while the genocide was taking place in other areas of Rwanda which they had not liberated, including the regions controlled by the French army. Every year, Rwanda devotes 13th April to the remembrance of politicians and other Hutu who, although not part of the targeted group, were killed for having opposed the extermination of the Tutsi.

Through their leaders, Bill Clinton and Tony Blair, the United States and the United Kingdom have since made peace with Tutsi survivors and apologized on behalf of their respective countries, which then supported key Security Council resolution 955 (1994), establishing the International Criminal Tribunal for Rwanda (ICTR) to prosecute persons responsible for the genocide.

And it is the same ICTR which put to rest the double genocide debate. Defense lawyers at the court had made it a habit to open their submissions with long, eloquent harangues on double genocide, at times, no occurrence of a genocide at all. Exhausted, judges made a general ruling:

On 16 June 2006, the Appeals Chamber of the Tribunal, in the case of The Prosecutor v. Karemera, et. al. ruled that:

‘from 6 April to 17 July 1994: there were throughout Rwanda widespread or systematic attacks against a civilian population on the basis of Tutsi ethnic identification. During the attacks, some Rwandan citizens killed or caused serious bodily or mental harm to person[s] perceived to be Tutsi. As a result of the attacks, there were a large number of deaths of persons of Tutsi ethnic identity”

The Court then instructed that all of the current and pending trials before the Trial Chambers of the Tribunal must refer to the events as ruled:  “beyond any dispute and not requiring any proof”, thereby confirming the Genocide perpetrated against the Tutsi as part of what is called “Jus Cogens”; Latin for “Peremptory Norms” of international law.

For the purpose of this article, peremptory norms are principles that are:“non-derogable” which bear “Erga Omnes Rights”: rights that are applicable to all. Not many norms are part of the exclusive club of Peremptory Norms; the very concept of “Peremptory” means all debates on the subject are permanently closed and it is time for action: Hence the subsequent resolution on an international day of reflection; the obligation of all countries to cooperate in bringing perpetrators to justice and more international measures to come, such as an international fund for compensation of victims and survivors of the “Genocide perpetrated Against the Tutsi”, hopefully.

While the Genocide Convention itself is Jus Cogens, the specific designation “Genocide perpetrated against the Tutsi” became a norm when it was designated by an International Tribunal to be “beyond any dispute and not requiring any proof” and:

The ruling was later buttressed by the UN Security Council Resolution 2150 of 16 April 2014.

Now, no resolution is passed at the UN without commentary, present and future, in favor or against, just like any judgement in the ICTR was appealed against, but most confirmed in appeal. We welcome such commentary as an opportunity to build awareness on the Genocide against the Tutsi worldwide.

In the last twenty six years genocide revisionists and deniers have continued to slither their way into lobbying at the state level. Double genocide theories and accusation in mirror are old characteristics of denial which indeed constitutes the last phase of any genocide. The world would be inspired not to listen to impostors, wolves in sheep skins, some masquerading as experts, others as genocide survivor, yet denying the very genocide against the Tutsi to which they claim expertise.

Tutsi did not deserve to die; no human does! Those who ever held that belief were evil and mistaken! Anyone who saw it happen and did nothing was wrong! Nothing they say or do will ever change history!

Recognizing April 7th as the “International Day of Reflection on the 1994 Genocide against the Tutsi in Rwanda” sends a strong message to anyone who means harm to the Tutsi ethnic group. It says that they shall not get away with it. That the entire world shall come together to track them down and bring them to justice. In the same vein, we celebrate the recent arrest of Felicien Kabuga in France, one of the masterminds and financier of the genocide against the Tutsi.

The UN is yet to set up a fund to compensate Tutsi victims and that is survivors’ next battle. 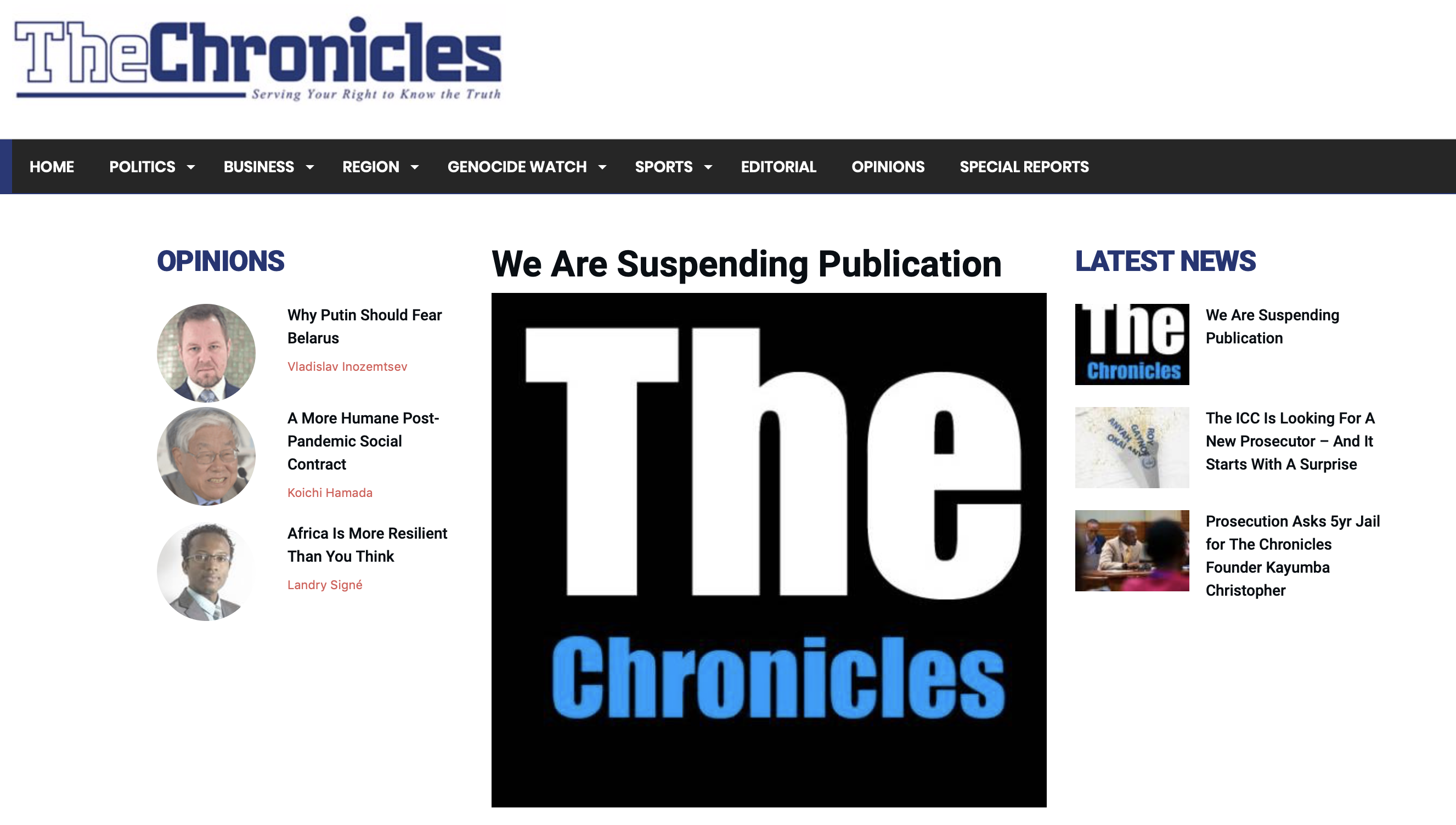