The war has ended and peace has returned to Rwanda. Dr. Emile Rwamasirabo, a senior cadre of the Rwandan Patriotic Front (RPF), the movement that stopped the Genocide is now serving as Rector of the National University of Rwanda. On a trip to Brussels, a Belgian professor who claims to be an expert of Rwanda at the University of Antwerp insists he wants to meet him. The Rector has no reason to agree to the meeting, they have fought on opposing sides; the professor, by the names of Filip Reytjens was an advisor to genocide regime, which Dr. Rwamasirabo and his RPF comrades have just defeated. But he is a gracious man, he accepts to meet the Belgian in a coffee shop at Porte de Namur, Brussels.

After complaining to the rector that his visa to return to Rwanda has been consistently rejected by Rwandan authorities, the Belgian professor shows him a book he recently published: It is a profiling of all government officials in the newly formed post-genocide government, from the district to the top, with their ethnic affiliations. The Belgian claims to have uncovered that the RPF is not sharing power adequately between Tutsis and Hutus.

Dr. Rwamasirabo is amused, but not surprised. Born in Rwanda he escaped the anti-Tutsi pogroms of the seventies and fled to Burundi; in fact, at the time he was a medical student at the very university he was now leading. He looks at his Belgian guest and asks:

The Belgian hiding behind his academic cover responds that his work is ‘scientific’ as an expert on Rwandan politics… ‘petty politics!’ the Doctor cuts him short: ‘If I came here in Belgium and start drawing lists of who is Flemish and who is Walloon in your government, do you think your country would grant me a visa? To what end would such a study serve the Belgian people? and on that, he stands to signal the end of a preposterous meeting. It is not today that a Rwandan nationalist and a neo-colonial academic will agree. 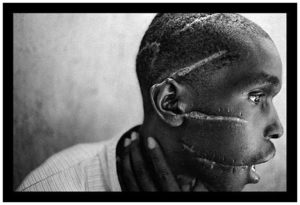 It is at Université Cheikh Anta Diop in Senegal, where he had gone to complete his medical education that Dr. Emile Rwamasirabo understood the ‘divide and rule’ ideology as designed by colonialists. His young mind had described the night he escaped as ‘Hutus wanted to kill me’. Having listened to his story, a conscientious Senegalese roommate asked him why?

On that day that he decided to become a Pan-African freedom fighter and to fight against ethnism, tribalism, racism and divisionism of all kinds. He later joined the Rwandan Patriotic Front which waged a war against genocide ideology.

The encounter with the Belgian was then something of a déjà vu and there were no hard feelings between the two academics. Each was living by his destiny; The Belgian was walking in the footsteps of his colonial ancestors trying to divide the Rwandan people and Dr. Rwamasirabo was the antidote; With his comrades they had fought and defeated the genocide. But both knew the struggle was not over. The Belgian prof had been defeated, but he intended to regroup, recruit and continue his genocide ideology agenda. Dr Emile is still here too, so are we, the young Rwandan generation.

‘Good luck to you’, he finally said as they parted ways. ‘And to you’, the Prof replied.

Fast forward 2018: A group of three researchers: Andrea Guariso, Bert Ingelaere and Marijke Verpoorten, two of them from the University of Antwerp and one, Guariso from Trinity College Dublin, have just published a study titled: ‘When Ethnicity Beats Gender: Quotas and Political Representation in Rwanda and Burundi’. Hiding behind ‘gender’, the study is a reproduction of Reytjens list of the 90s, profiling Rwandan female leaders according to their alleged ethnic affiliations.

That is not all, the study makes some of the most outrageously racist claims to be seen in the academia: ‘in ‘many of the African regimes in which gender quotas have been introduced are de facto authoritarian… in the ethnically divided societies of Africa, a woman may be and/or feel better represented by a co‐ethnic man than by a woman of different ethnicity’, the study contends.

This is already highly problematic and untrue, however there is more: After the genocide, in an effort to root out division among the people, ethnic profiling was outlawed in Rwanda. So the researchers relied on methods used by their ancestors: Measuring noses, physical appearance, place of birth and age segment to allocate ethnic tags to their respondents. 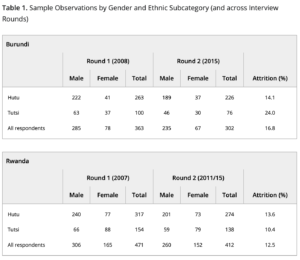 The study also couches its findings on data collected in 2007, based on experience lived in the nineties to describe women empowerment in today’s Rwanda. The Antwerp school is a laboratory of ethnic politics in Africa; a remnant of the Belgian colonial past. Having failed for twenty-five years to receive a visa to Rwanda, Professor Reytjens, a co-author of the -now abolished- constitution that entrenched ethnicity on Rwandan identity card and made it easy for Tutsis to be targeted, is sending his foot soldiers to continue his work of dividing the Rwandan nation under the guise of ‘academic research’.

With that in mind, the report in itself did not come as a surprise. What shocked me was to find out that it was funded by the UN-University. I struggled to imagine a team of NAZI physicians, Josef Mengele, Eduard Wirths and Aribert Heim, being funded by the United Nations to continue human experimentations on Jews in Auschwitz – or Antwerp, 25 years after the Holocaust…