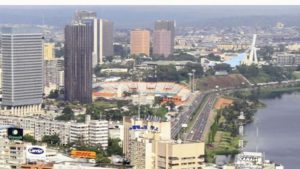 I am leaving Abidjan with deep humility, having learned one important lesson; ‘There are more things in heaven and earth, than are dreamt of in my philosophy’.

Or in prose: books can be deceiving, if one doesn’t get to travel on site and see for oneself.

Here, I was exposed to another facet of the complexities around the France-Afrique, and post-independence governance in general. I have made peace with Mr. Felix Houphouët-Boigny.

I know now that he was a great man. Finally, I understand my father more.

In the so-called anti-imperialism war, I had picked the side of Thomas Sankara, allegedly against Houphouët-Boigny. I thought of Houphouët as a ‘sell-out’, who never stood up against the French but instead, sold of his country to them and facilitated their hegemony in Africa; on that I was right.

But that’s not all there is to the man.

It was sobering to see Abidjan, to listen to Ivoirians to appreciate the work that founding president Felix Houphouët-Boigny had achieved.

‘Tout ce que tu vois là, c’est Houphouët qui nous a laissé ! le Gbagbo-là, il a parlé, parlé seulement. Le nouveau, il essaie.’ (All you see, was left to us by Houmphouët, Gbagbo only talked, the new president, he is trying), an Abidjanais thus summed-up his country’s leadership in the last 25 or so years, as we crossed the ‘Pond Henry-Conan Bedié, a state-of-the-art chain of highways and bridges, crossing ‘la Lagune’, named after Houphouët’s immediate successor, and the man who first introduced tribalism to the country; or – ‘Ivorianism’ to be precise: ‘l’Ivoirité.

Things were never the same from then on, leading to a series of coups, a brief civil war and limited violence, only coming to an end with the troubled accession to power of Mr Alassane Dramane Ouattara, a longtime prime minister to Houphouët, who was initially sidelined in the ‘Ivoirité’ bigotry, by aforementioned post-Houphouët rivals.

Unlike the youthful icons of his time, whom I grew up revering, namely; Lumumba, Sankara, Sékou Touré and Nkrumah, Houphouët was a seasoned diplomat who did not believe in unnecessary antagonism, and managed the post-colonial geopolitics to the benefit of his people.

He made of his multi-ethnic Cote d’Ivoire (64 known ethnic groups) a welcoming land to all peoples of the region and beyond; Burkinabè; Liberians, Togolese, Ghanaians, Guineans, Malians, Lebanese and indeed the French. He offered them citizenship and jobs, especially in farming business.

As a result, Cote d’Ivoire was the biggest producer of Cocoa and Coffee between 1960-1970, and by the time my father went to study at Université d’Abidjan in the early eighties, they still spoke of ‘le miracle Ivoirien’ (the Ivorian miracle).

Of course I abhorred driving by boulevards Charles de Gaulle, Valery Giscard d’Estaing and especially Francois Mitterrand, all named after past French heads of state.

I felt uncomfortable with imposing buildings named after catholic figures and a colonial statute erected at the entrance of the most important hotel in town; l’Hotel Ivoire.

But the drive was smooth and the streets mostly clean; which changed me from my own university days, whence I live in Mozambique to quench my youthful fascination with socialism.

Sure I enjoyed walking in the streets of Maputo named after all my heroes; Ahmed Sékou Touré Avenue, Agostinho Neto Avenue, Amilcar Cabral, Vladimir Lenin, Patrice Lumumba, Kenneth Kaunda, Samora Machel; I even worked at Universidade Edourdo Mondlane and frequently visited the FRELIMO: ‘Partido da Vanguarda Socialista’. Except these streets were potholed and unclean…

That paradox is well captured in the famous maxim: ‘we prefer freedom in poverty than riches in bondage’, affectionate to late Ahmed Sékou Touré the first President of Guinee-Conakry.

Of course Sékou Touré could not see eye to eye with Houphouët-Boigny, and of course as youth it is important to side with Sekou-Touré and unleash the rebel in us; which is why ‘Eric Kill-Monger’ is a popular Black Panther character among the youth.

However, comparing Guinee-Conakry with Cote d’Ivoire today puts things in context. Perhaps we mustn’t make such trade-offs as are devised in Mr. Touré’s maxim.

One wonders; isn’t freedom best enjoyed in riches? Aren’t richer people abler to free themselves from bondage that the poor ever could?

So my view of Nanan Houphouët is more nuanced today. His closeness to France notwithstanding, I raise my hat to the man who achieved systemic transformation for his people, built infrastructure of the highest standard, invited citizens of all nations to work in Cote d’Ivoire, and built the most advanced West African nation to this day.

Many of his successors tried so hard to reverse his achievements but failed; CIV is a true middle income country, USD 1,538.3 (2017); not due to some natural resource, but to the sheer hard work of its people and the foresight of its founding father.

We Rwandans should follow the Ivoirian example and be more invested in agriculture and education, should we aspire to be a stable, middle income country.

I must come back here. Luckily, Ivorians are welcoming people, true to Houphouët’s legacy. Besides, Abidjan is sweet, as they say it themselves; ‘C’est doux…’