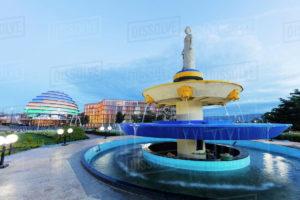 The CNN article is right about one thing: It is no accident that a statue of a strong, gracious Rwandan woman stands tall at our main round about – fittingly!

I have elaborated, in legal terms and with evidence, on the crimes of the two ladies portrayed as saviors of women in Rwanda by western media, in this article: and this article

However today, I would like to negate the assertion that Rwandan women need saving:

Rwandan women are the mothers of our revolution. They are the custodians of our unity and reconciliation.

In exile, while our fathers and grand fathers struggled to cope, our mothers remained resilient, they remained keepers of our national memory. They raised children with values, nurtured them, taught them the Rwandan culture; the dance, the songs, the tales; the love for Rwanda. They sent them to liberate their country, they went with them and served as leaders of troops, fighters on the front line and nurses in the rear.

Our mothers and sisters were cadres of the Rwandan Patriotic Front in exile, they walked at night to collect medical supplies, to transmit information; they toured the world organizing concerts and festivals to raise funds to buy guns and ammunition, all for the struggle. They visited fighters on the front and boosted their morale, they prayed for them.

Most beautifully, the divas provided a captivating soundtrack for the entire war and through song, introduced the young exiled that I was to the ideals of liberation. Their soothing voices mobilized thousands of youth to join the struggle.

After the Genocide in which they lost everything, still, they advised for no revenge. They served as counselors for the traumatized, as judges in the Gacaca courts. They pardoned genocide perpetrators and gave milk to children of those who had killed their families, they adopted orphans.

Rwandan women have always led, they lead. For centuries, no King ruled without the support of the Queen Mother. Rwandan women did not wait for a young girl trained in America to ‘speak on their behalf’ or for the daughter of a convicted genocide perpetrator, exiled in Europe, to ‘liberate’ them. How can a civilian liberate liberators? Our mothers, our sisters are trained, experienced, seasoned and gracious.

We listen to them because they are our voice of reason. Our country would be nowhere without them. Rwandan women too, have been a blessing to the entire mankind. Today they keep peace in many nations where it is needed across the globe, as policewomen, as United Nations blue helmets, and by the grace of God they will be leading international organisations very soon.

The women they know in America are the ones who make noise, who are indecent. Those who preach division and hatred. But true Rwandan women leaders don’t typically make noise, they lead, not through noise, but through calm and wisdom; they preach unity, they preach forgiveness, they preach love.

Rwandan women earned their position, not through populism, but through strength, sacrifice and selflessness. They do not seek international media attention because they possess our gratitude, our love and respect, as their sons, their brothers and their husbands – and that suffices to them.

When our country suffered the most atrocious of tragedies, the world stayed silent. It is not today that the world is about to lecture us on who our leaders should be. It is not today that they will tell us what our women can or can’t do; or which of our women is good or bad for us. We know who we are. While the world looked away, we went through a process where the best among us stood out, and we know who they are.

All these western charlatans paid to paint normative pictures of our people and of our way of life are of no relevance to us. Their views are of no consequence to our decisions. Those who listen to them are free to do so; they should make no mistake however, to think that we will be impressed by their folly. And no amount of fake news noise will save them.

We have paid the ultimate price for the unity and peace that we enjoy today; the most dear assets which we treasure in this country. We know they are rare commodities in this world, on this continent, in this region. We know too that there are many who would gain from our failure to preserve them. But that’s why we are here; standing ready; waiting for them.

And on that, women and men of Rwanda agree.

Dear Louise, I hope you had the time of your life.