Strength of a Rwandan Woman

‘So amazing how this world was made, I wonder if God was a woman…’ Shaggy, Strength of a woman.Yesterday I went to the Global Shapers discussion with the theme ‘Women and the modern/digital Era’. Discussants were women of power who shared their experience and struggles in asserting their space and rights in government as well as private sector, leveraging on the digital era.

I salute the achievements of Rwandan women, their contribution in all the initiatives that were undertaken in this country to be where we are today; from waging the war against a government that excluded a segment of its people, to putting an end to the genocide and reconstructing the country.

Indeed women have been at the heart of all those struggles, and as a result, equality of men and women is enshrined within the Rwandan constitution probably as strongly as the unity of the Rwandan people.

Women emancipation in Rwanda however, is less than 20 years old, but up against a 2000 years-long oppression, both in Rwanda and the entire world.

Not least, most inroads achieved in that respect remain quantitative to date. For instance, while some Rwandan men think it is not ok to beat their wives, others refrain from the violent practice for fear of the police.

Also, while women have been quickly elected in positions of power, their social economic emancipation, especially in rural areas has evolved at a slower pace.

Most worrying still, Rwanda is surrounded by countries in the sub-region, region and the world, that still oppress women, both politically and socially. And if that remains the case, the rights of women in Rwanda remain precarious today more than ever, for there is no world’s critical and political mass to safeguard them.

But why is that, and what should be done? In an article titled ‘Wonder women and Maco men’, here: http://econ.st/1hvxNP5, the Economist describes the ‘Latin American paradox. Where women’s great progress towards equality with men, especially in schools, workplaces and politics, contrast social attitudes, that have changed more slowly.

By citing this article, I want to point out that even if all positions of government today were to be given to women in Rwanda, we still wouldn’t be addressing the problem. Nothing guarantees us that the next government wouldn’t replace them all with men in a single decree.

Not least, if in 20 years we envision a federal country of the East African Community, the progressive status of Rwandan women would be threatened by less feminist ‘confederates’.

It is in this era, with this conducive government that Rwandan women and male feminists such as myself, have a chance to safeguard women’s rights irreversibly and ensure that they will stand the test of time, regardless of favor or disfavor from government.

For that we mustn’t continue to follow the current path charted by macho men. In addition to treating the symptoms of women oppression such as domestic violence against women, gender based violence or unequal access to power and resources – disfavoring women; we should launch an assault on the very fundamentals, the pillars of women oppression, namely; religion, culture and history – at least their piecemeal interpretation by rapacious men.

For instance, in my own experience, I have found out that women are physically and mentally stronger than men. In addition to having a womb, carrying a life and giving birth – Let’s pause and picture that for a minute – Which indeed gives a woman formidable, magic powers and grace, a woman is almost twice more resistant than a man. If deprived of sustenance for a couple of days, a man will die almost 48 hours before a woman.

Once given the same aptitudes women are likely to excel more, or at the very least, do as well as men. – As results in Rwandan national exams frequently confirm, what was otherwise common knowledge.

Against that backdrop, I see no logical grounds then, to ask women to submit to men.

Under equal circumstances men had no chance to lead, yet they are more insecure and power hungry.

Also, women are emotional and compassionate, and those are virtues that are critical to the survival of mankind. I am dismayed today by how the system we live in has managed to discard them as weaknesses, unwanted in business and politics – and women and feminists allowed that! Those are supposed to be the criteria for hiring and electing, not signs of weakness!

I am convinced that the reason the world is violent, unequal and with too much suffering, is because it is ruled by men, who lack those noble attributes. Women that have managed to breakthrough in this cutthroat business environment, have had to inhibit their motherly nature and grow sharper teeth to sail the sharks-infested, troubled waters. That is not the right approach in my opinion;

For inherent, systemic, structural oppression, we need inherent, systemic, structural revolution. Women in power in Rwanda: it is not your turn to eat, it is your turn to change the world! The same applies to feminists: Even if you have to upset or shock some men, you must not seek to excel in their game, but change the rules of the game all together!

Feminists, stop scratching the surface. You have to write your own version of the bible: The Feminist bible; the school curriculum, the Rwandan, African, world history. Put ‘compassion’, ‘decency’ and ‘love’ into terms of references and manifestos; change the world.

If you are one person, they will call you mad – like they do me already. If you are many, rebels, basing your fight on scientific grounds: you will succeed!

Oh, before I forget: Go pray at the ‘Women Foundation’ Church. It is a friendly space for women to worship. They have feminist teachings that demonstrate how Christianity is empowering to women, and how empowered men respect their wives. But most importantly, the Apostle there is the wife of my friend Eric. 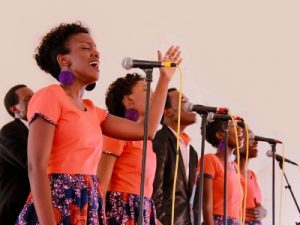 You are not gatekeepers of the oppression you are pioneers of a new world order, one that is led by women – and decent men.

By the way, the story of a woman coming from a man’s rib, I’m not sure… Here is what I know: The man came out of a woman’s womb. I know this because 33 years ago it happened to me.

The mean courtesans at the Rwandan palace…